History of a Cocktail rings

It became popular in the time of prohibition (1919-33) in the US, at illicit cocktail parties and secret clubs, which were known as “speakeasies”. Woman used these social gatherings to dress up and show off their elaborate rings featuring a large centre stone.

They were made by both fine and fashion jewellery houses. After the prohibition ended, cocktail rings continued to be in demand. 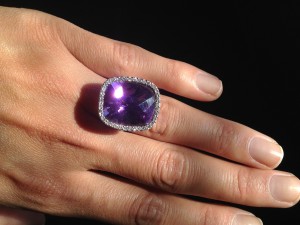 "A few years ago when I visited the Louvre, I spotted a Renaissance Madonna with quite an unusual feature: she was wearing a ring on one of her fingers. Its perfection and simplicity inspired me to design a jewelry collection that radiates an equal measure of femininity and strength."